Debashish shoots exclusively with Nikon and is seen with his equipment list.

Featured in the prestigious Africa Geographic – Photographer of the Year 2020 Contest – Debashish Dutta is a pro – level Natural History Photographer with a career spanning over 12 years shooting in the Indian and African wildernesses.

His work has been well recognized by Nikon India, Nikon Asia and BBC Earth.

He has been extensively covered by the mainstream India media with his features appearing in DNA, Deccan Chronicle, Asian Age, Indian Express, magazines like CEO India and Gladrags. He has been interviewed by FM Radio Stations like Fever 104 FM and Radio One 94.3 FM.

He has earned a written endorsement for his photography from Ms. Naina Lal Kidwai, ex – India Head, HSBC.

Debashish is the Founder of "Return to the Jungles"

– a platform for raising funds for biodiversity conservation projects in India and for running a community driven afforestation program called "The Sacred Grove". 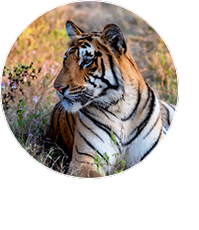 Along side his work in the wild, Debashish has had a dynamic corporate career with over 20 years of experience across large global banks and financial services organisations like GE Capital, HSBC, ABN AMRO, Royal Bank of Scotland, Credit Suisse and State Street. Currently, he leads Enterprise Risk Management for a large global financial services organisation in his capacity as Global Director and Head – Enterprise Risk Management.

Debashish shoots exclusively with Nikon and his equipment list is:

From Dawn to Dusk is an attempt at preserving precious natural history moments on fine canvas framed with beautiful artistic frames.

Each frame represents an original natural history moment captured in Indian and African wilderness. India is the only country in the world which was blessed with all the big cats – the Royal Bengal Tiger, the Asiatic Lion, the Indian Cheetah and the Leopard. Alas! The Cheetah is long gone and the Asiatic Lion has been relegated to one corner of the sub – continent. As a passionate student of natural history; I am in a race against time – the race to capture as many unforgettable natural history scenes as I can with as much finesse as my abilities afford me.

It would be a great disservice to mother Earth; if these moments were captured and then left hidden in the dark chambers of a machine. Instead, I decided to print and share them with the world. Let the world see the beautiful natural places the denizens of the forest live in; blending harmoniously with their surroundings. Without any belongings, without malice, without prejudice they live their lives with balance humans can only dream of achieving. That is why their homes are naturally rich and blessed. Their societies are bereft of pollution and corruption because they only consume as much as they really want. Not a morsel more. And not a morsel is wasted. For them conservation is a daily devotional – nothing fancy.

Through these beautifully hand-crafted frames; I am hoping to deliver such and more messages to the connoisseurs of natural history. May their imagination take flight and may their heart swell with the desire to become one with those who live under the endless sky with endless joy.

From Dawn to Dusk celebrates natural history. It also calls for the complete and unequivocal preservation of things that make this planet such a joy to live in. Imagine how lonely will we feel if we have no company other than of humans! These Collector’s Edition frames will bring life to your living and working spaces. They will make for very worthy gifts for those who prefer the natural to the artificial.